Make your own healthy ice cream

I've been craving ice cream lately! I don't know if it's because I had a lot of it on our vacation (the unhealthy kind!), writing my review on Coconut Bliss or just because it's summer, but I've got to have some more!

I was on a mission to make a healthier alternative with a natural sweetener and lower in fat, but still taste good! I spent some time online looking up various recipes. I never found one that was what I was looking for, so once again I created my own recipe. I'm amazed the first time I made it, it was good! 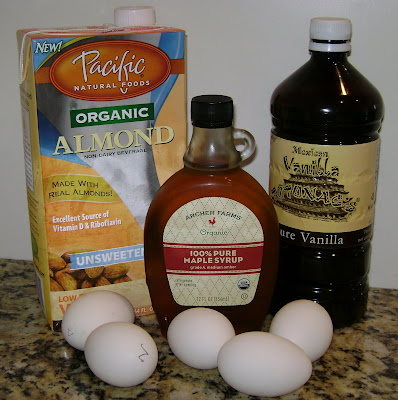 Ingredients
As I mentioned before I love Pacific Natural Foods Organic Almond Milk! If you look on the nutrition label of most almond, soy, rice milks you are going to find it is sweetened with evaporated cane juice which is the same thing as sugar (IMO). Pacific Natural Foods makes a really sweet one that does not have an added sweetener. Go to their website for coupons on their almond milk and other products! Also by making this ice cream with the almond milk it is so much cheaper! Have you seen the price of heavy cream lately??

You can see I'm still working on that huge bottle of Mexican Vanilla Extract I bought in the Caribbean in January! The eggs are free range, anti-biotic free from my in laws. It's nice to get fresh eggs :-) A side note, save your egg whites from this recipe! Put them in a bowl and then after you make the ice cream mixture go ahead and scrabble them. You can keep them in the fridge until breakfast. 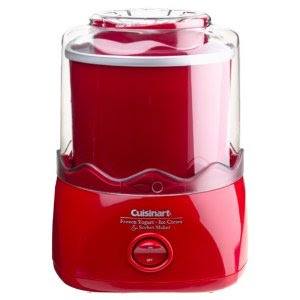 I have this 1 1/2 qt Cuisinart Frozen Yogurt and Ice Cream Maker and this recipe works great in it! I have to admit I only let my mixture chill in the fridge for 3.5 hours because I wanted some ice cream so bad ;-) It still turned out great! This ice cream is not as creamy as Haagen Daz because obviously it's much lower in fat content, but it's just as good! Freeze the leftovers (if you have any hehe!) in a freezer safe plastic container. This ice cream freezes pretty hard (as I have experienced with all homemade ice creams, even the ones with all heavy cream) so you'll need to let it sit out on the counter for a few minutes to thaw. 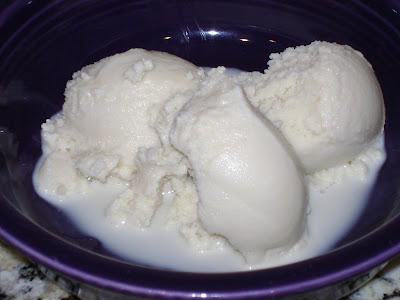 Next time I want to try blending in some sweet strawberries or perhaps some chocolate & nuts. Yum!

That sounds SO good! We are definitely going to try this!!!

girl you must be reading my mind..... I just bought this ice cream maker a couple days ago, and have been wondering about healthy recipes! Awesome..... can't wait for it to arrive. Ahhh, I love Amazon!!!

Thank you! Homemade ice cream for birthdays is a tradition in my family. Since Tate has a dairy allergy, he never gets any. I want to make some for his birthday, but hadn't started researching recipes yet (told you I'm slacking). I may even have to try making it with coconut milk too!

that looks amazing!! for something that tastes nothing like ice cream, try protein ice cream -haha