It's been really fun going through all the links of women sharing their wedding pictures today on Kelly's Korner. So many pretty weddings! I'm still partial to mine though ;-)

Here's a picture of our invitation. We got married at Harwelden Mansion and since it was located back in an older neighborhood, the parking was limited, and there was some construction on some of the streets I created a little card with the picture of the mansion on one side and a map on the back, then had them printed at Kinkos to enclose with the invitation. We had one of the invitations framed next to the guest book. 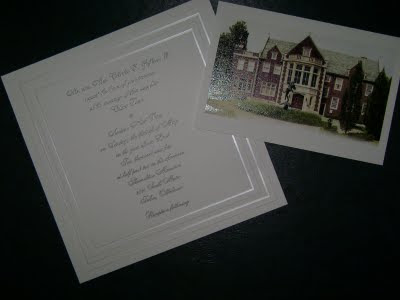 In case you don't notice, everything was square....the diamonds in my engagement ring, the invitation, the neckline on my dress, the cake, the favor boxes, etc.

We got married at 2:30, Sunday, May 30, 2004. We were engaged the end of November 2003 so most places were already booked solid for June. There were a couple of spots left in May and that Sunday was one. What was cool about having it on a Sunday is that we got the mansion for the day, unlike if it was on a Saturday you only got half a day, because obviously there would be two weddings held on Saturdays. I think it cost a little more, but it was worth it not having to be rushed. May 30th is also Memorial Day, I bet not many people know that all they care about is when Memorial Day is observed haha!

It was a beautiful day despite having been up til 1:00 am the night before because there were tornadoes. We (Andrew, two friends from out of town, and I) were huddled in the bathroom during the storm and sirens were going off. So...I actually saw Andrew on our wedding day! He left after the storm had passed and knew we were ok.

Here are some pictures taken before the wedding. We did our pictures as a couple after the wedding of course.
With my bridesmaids, my sister and Andrew's sister. 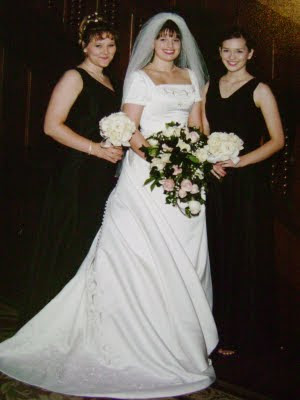 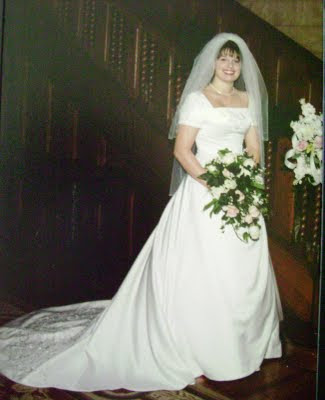 With my brother and sister 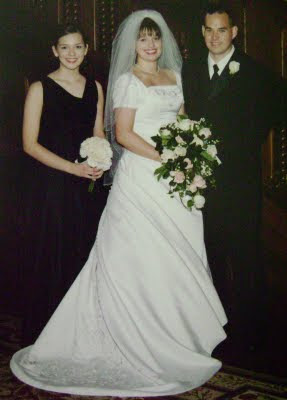 With all the guys. There was two groomsmen, and 2 other guys that were to help with the food etc (I heard it didn't work that way...) and my brother and nephew were the doormen. I remember how difficult it was to breathe in this picture!! That dress was so tight and I had to sit down on these stairs kind of hunched over and smile. ahh! 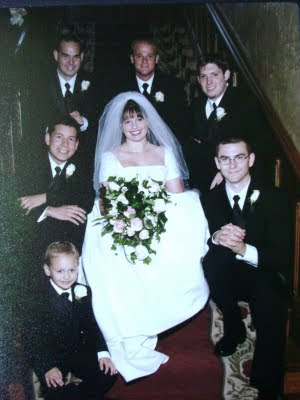 Andrew and his best man, his brother. 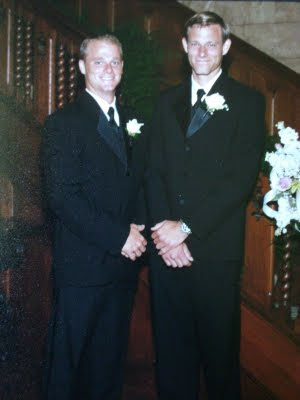 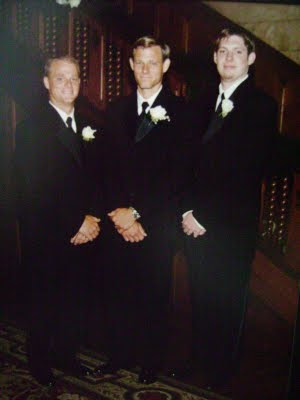 Andrew and my nephew. 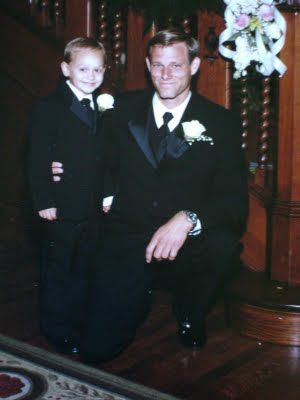 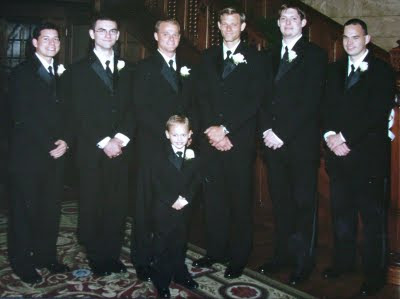 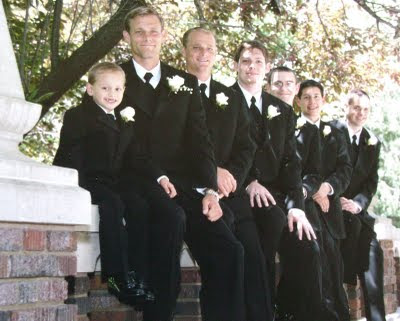 Andrew with the girls. 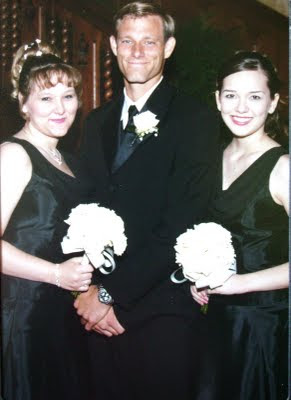 Andrew with his brother and sister. 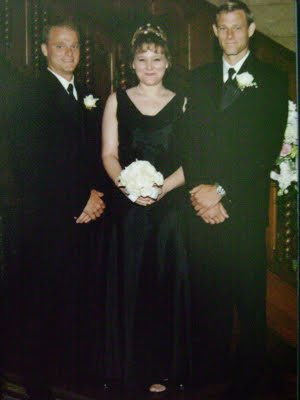 This picture is cute. My dad and Andrew. They were supposed to be serious, but they were having a difficult time :-) 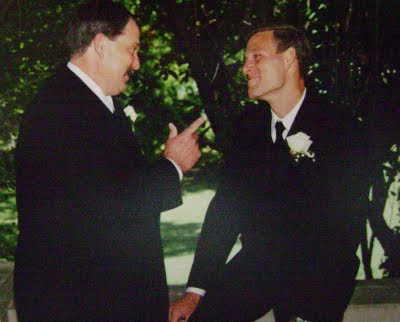 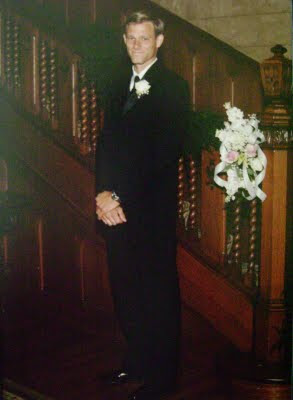 OK, now on to the ceremony! I show the picture below not for the wonderful quality lol, but so you can see what the mansion looked like inside. We had greenery and flowers over the banister. The wedding party and ceremony took place on the platform above, the guests watched below. Family sat across from the platform upstairs (kind of difficult to describe). The window is the front of the mansion and the door here is the front door you see in the picture. Not only did we have flowers on the banister but also had beautiful topiary on all the tables in the other rooms where the reception was. The WHOLE place smelled wonderful!!! Just like flowers...oh, yeah and CHOCOLATE. We had a chocolate fountain, which I will show pictures of next week. 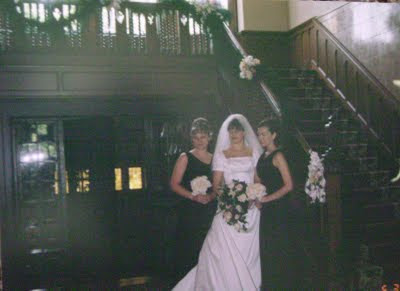 I ordered english roses, but got regular roses! It think it was the only thing that "went wrong" in the whole wedding. My mom warned me when she saw them, but before I did. I was a tad disappointed, but the roses were still very pretty, at least the colors weren't wrong! Here's a picture of what english roses are. 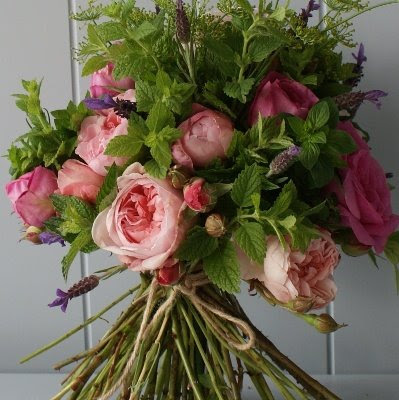 We had a string trio, harp, cello and violin play during the ceremony and reception. It was wonderful to have beautiful live music playing! So romantic and definitely went well with the style of wedding. 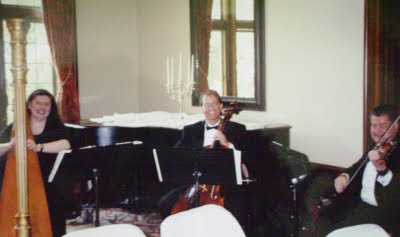 Here we are waiting around the corner from going down the stairs to the platform! 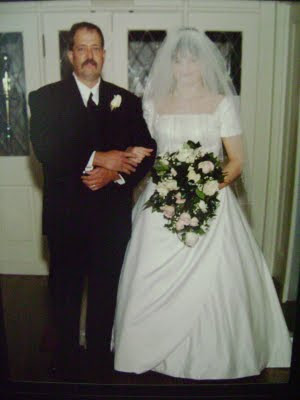 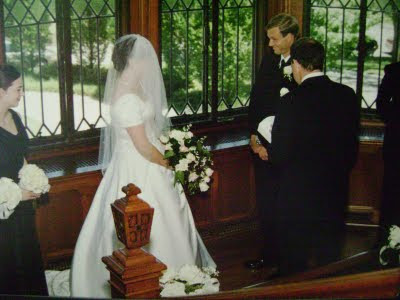 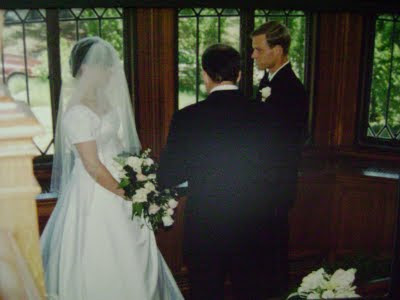 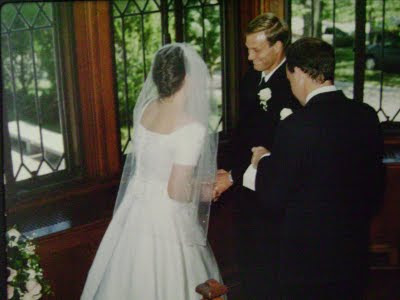 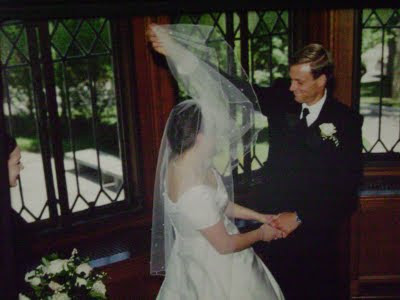 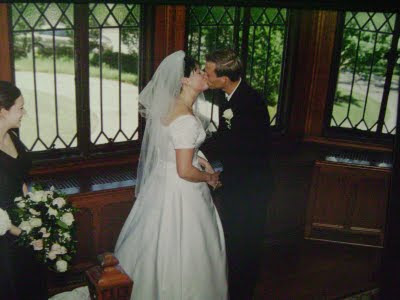 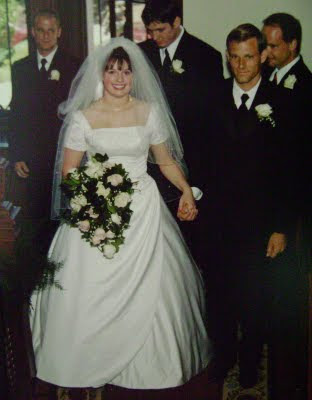 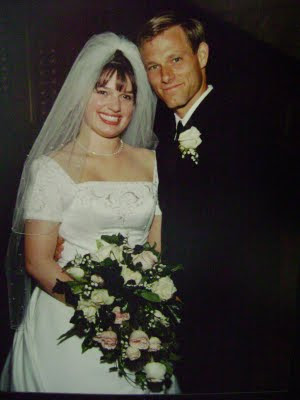 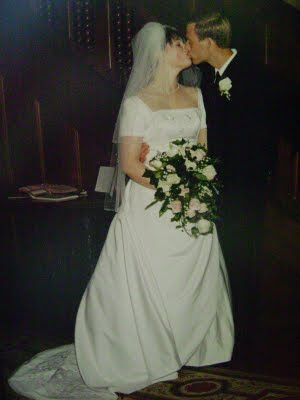 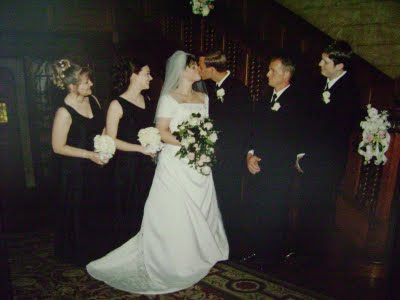 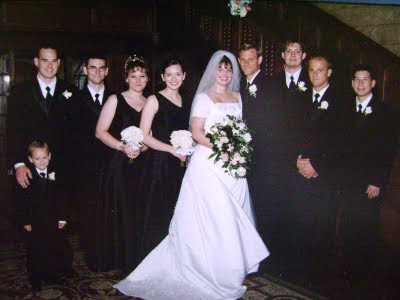 I have a lot more pictures, but I'll share them next week!
Posted by Chari at 9:15 AM

How pretty you look. Everyone looks terrific. And your flowers are beautiful!
I love your invitations. I purchased the same style but in a sage green 13 years ago. Classic designs never go out of style!

love the pics - you look beautiful! flowers and invites - so pretty! :) thanks for the comment on my blog (LIL RUNNER)