As I mentioned before I have worked with fondant and gum paste before for various cake decorations over the last year, but I have not covered a whole cake with fondant. I'm getting braver now and  I am really wanting to do a fondant cake for Ethan's 2nd birthday next month. What better than the 4th of July to practice with my first cake!

I learned from watching Cake Boss that a drawing of what you want to make is helpful :-) I can not draw at all! 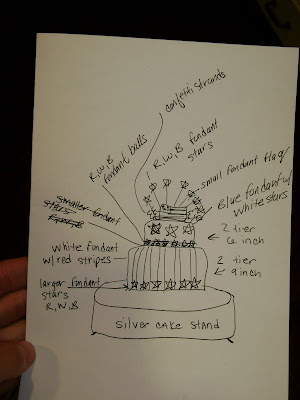 My actual cake varied a little from my drawing, but that's ok it gave me a good idea of where I was going with it. I am going to point out my flaws though lol

I have tried Wilton fondant before as well as making my own marshmallow fondant. I am not fond of the workability or taste of Wilton fondant at all (sorry, Wilton, but you need to revamp!). Previously the MMF I made was really stretchy and I knew would be difficult to work with so I read through the forums on cakecentral and decided to try Fonderific brand. I was able to purchase the Fonderific at a cake supply store that just opened up for slightly more than what I could purchase it for online. I ended up buying a 2 lbs container of buttercream flavored red and 2 lbs buttercream flavored white. I read on the forums that it is difficult to achieve a true red when you color it yourself. I don't really consider the red Fonderific a true red and I think I may attempt to do my own coloring next time.

So lets start with the inside part! I've had a difficult time finding a good moist cake recipe. Earlier this week I made the golden cake recipe out of my America's Test Kitchen cookbook and it was perfect! Really moist and it is a keeper. For my 4th of July cake I wanted chocolate though so I went back to the America's Test Kitchen basic chocolate cake recipe. It is unbelievably moist and flavorful, but I messed it up this time and it was dry! I made a recipe and a half for the 2 tiers. I accidentally doubled the amount of cocoa it called for and didn't realize it until it was in the oven. Ooops! Between the layers I made ganache. I have never had ganache or made it. Ganache is a thick fudge type frosting that I cooled down to make a filling for between the layers. Simple to make, but expensive. It is made with equal parts of bittersweet chocolate and heavy cream. I may do the butter cake with ganache for Ethan's birthday cake.

I covered the cake in vanilla buttercream. I worked really hard to get the crumb coat nice and smooth. I think I did a pretty good job.

Next was adding the fondant covering. If you notice I planned on covering the bottom tier in white with red fondant stripes. I made most of the decorations the day before and I was afraid that I would not have enough white (and I was right, I would have not!) so I ended up covering it in red and added white stripes. I took a nice chunk of red because I knew I needed to roll it out really thick to keep it from looking lumpy. I did a really good job. The big mistake I made was not buying fondant smoothers! I worked on smoothing out the cake so long that the heat from my hands was making the buttercream warm and thus making it look lumpy! I had to put it back in the fridge to harden back up a tad before smoothing it over really quickly again. After I added the stripes it was done!

Then I started on the top tier. I did not have enough blue colored and knew my fondant was going to be way to thin to cover this cake! I was upset about this, but I made do, including rolling it out, trying to apply it and then starting all over 5 times!! Because it was so thin I had to work super fast. Plus the heat of my hands went straight through that fondant! Yikes! It got lumpy underneath fast! I ended up putting it in the fridge for a few minutes to harden before I could smooth it out better. Notice the two little wrinkles right in front :-/ I probably could have gotten those out it I worked it a little more, but I figured my balls would hide it better than it did. Oh well!

Next I added the decorations on top of the cake. I just knew I needed to make the decorations on top in gum paste, but I didn't take the time to go buy some. Big mistake! I wanted the confetti sticking up out of the cake, but fondant is too soft for that. The stars had a difficult time staying on the wire......but they did manage to stay on. The larger stars in the middle were way too heavy and I had to use multiple tooth picks to prop them up in the back. I didn't have a star cutter small enough to make the flag topper so that is why I choose to make a larger star instead. The stars on the top all have some type of glitter on them. They were much prettier in person :-)

I added the white stars to the top tier and then added the balls and stars around the bottoms of the tiers. I kept it in the fridge over night because of the ganache and I was afraid that the stars would fall off the wires if they weren't kept cold. Right before my family came over I took it out and steamed it well using my iron (a tip I read off of cakecentral!). Steaming makes a world of difference and gives it that nice shiny glow. Much better than trying to rub everything with shortening. I also read on cakecentral people use cooking spray which may work just as well. My family ooed and ahhed over the cake. I'm pretty darn proud of it myself. Now if I could have gotten the blue fondant perfect on that top tier I would have been on cloud 9 about it lol. This is my first fondant cake so I guess I better give myself some slack ;-)

It took me close to 3 hours to decorate starting from filling the cakes to ganache, crumb coating to having the cake done. Plus at least 1.5 hours to make all the toppers the day before. All together about 5 hours including the time it took to make the cake from scratch. That's probably pretty slow, but I really took my time trying to get it almost as perfect looking as I could.

I learned from this experience to make Ethan's cake better looking that I MUST have fondant smoothers! I also LOVED the Fonderific fondant. It tasted great and it was like a dream working with it. I could keep it out on the counter while I worked and did not have to worry about it drying out. Even today when we ate the cake I ate some of the fondant because it was still so soft! Great stuff! 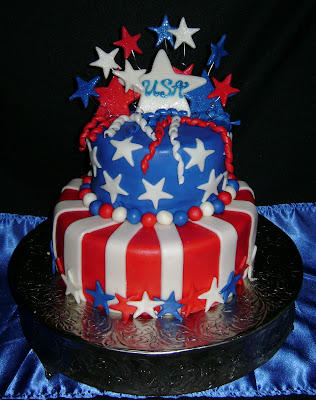 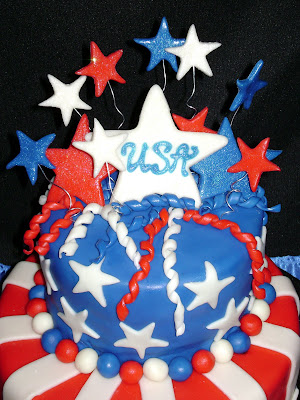 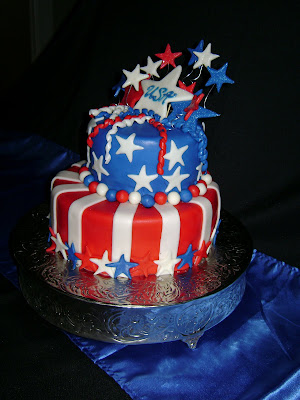 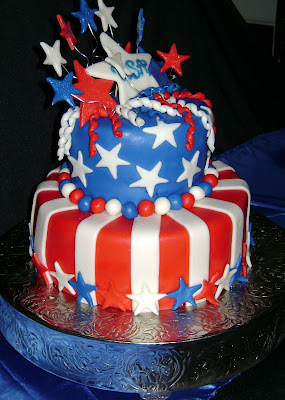 Very, very well done! I never end up doing many cakes in fondant because of the taste and chewiness factor. It sure makes a nice looking cake, though. :)

Way to go!!! That is one Super looking cake. Maybe I'll have to try working with Fondant again. You inspired me!

WOW!! That is amazing! You did a great job. A lot more creative then my patriotic cupcakes. That is really great for you 1st time.

Oh my gosh! Chari, it looks amazing! I had to scroll down right from the start and look at the pictures. I am so impressed!

Wow, what a cake! You put a lot of work in it! And yes, VERY smooth wonderful job!

You did a great job on your cake creation. You should be proud.