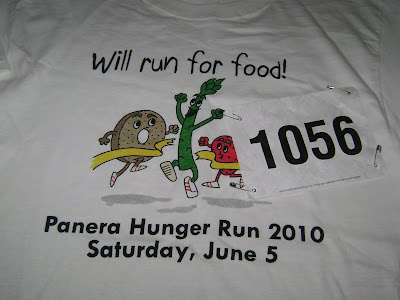 I was scheduled to do my first 5k race (since being pregnant!) May 15th, but because of the rain I decided to do the next closest 5k. You can read my post here. What I was dreading then looks like I will be facing: THE HEAT! Yup, it's forecasted to be the high of 97 and the low of 75. The race doesn't start until 8:15 a.m. which during the summer is one hour too late for me, it's toasty! After asking the advice from a couple of running friends I decided to go ahead and do it. I have been working so hard the last few weeks on my pace so I can shoot for a new PR. I'll just do the race and see how it goes. This is a fundraiser race and it has been advertised heavily for weeks so I'm excepting there to be a lot of people.

I'm getting excited and starting to feel the nervous jitters already! Today is my last run day before my race which by the way is National Running Day! In prep for my race I'm going to be some swimming and getting well rested. I don't want to work on the SHRED this week because I don't want to be sore and stiff for my race ;-) I'll have to hit it hard after the race though because I need it. I'm also making sure I'm getting enough sleep which I recently discovered has been my reason for my weight plateau the last several weeks!

I'm looking forward to my race and sharing my results.

Good luck in the race this weekend! I have never had the courage to participate in a 5k run so you are my hero! Have fun!

I'm soo excited for you!Also, looking forward to hearing all about it!! Get lots of rest and remember I'll be praying for you!