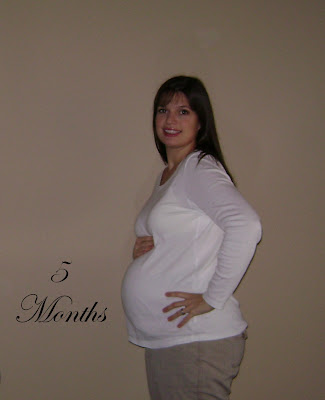 More than half way there! I'm 5 months and 23 weeks now. Not much to report on this month. Just feeling more movement and kicks all the time. My energy level has picked up a tad and I'm not as tired anymore. Although there are many afternoons I need a nap. I am starting to have that feeling that Cole is going to be a bigger baby than Ethan. He is already kicking up by my ribs and he's pretty strong considering his size. Yikes, I may not be able to use those extra small diaper covers after all! I'm still working on my diaper stash. As soon as Christmas is past and I have more extra time I'll get it finished and I will post about it.

Still no back pain. I've only had a couple of instances of having bad back pain, but it was because I was on my feet all day long cleaning the house for several hours. However, it wasn't the back breaking pain that I constantly felt with Ethan. I am so thankful about this and it makes this pregnancy feel a bazillion times easier than with Ethan! We'll see how I do as Cole gets bigger though.

Looks like we have settled on a middle name: Reid. I suggested that he have the same initials as me and really Reid was the only name we could come up with after looking at several  'R' boy name lists.

You look so cute!

You look amazing! I love the baby bump :)

Hooray for half way, and big babies are so much fun. David was 8lbs 15 ounces and was in the xs covers for about 8 weeks. Not bad, but it sure went fast!

You look good. I hope the rest of your pregnancy continues to go well. I like the name.

Aww, you look great! It's so amazing feeling them kick even if it is painful sometimes.

my first has the middle name Reid. I feel like i am totally out of boy's names so if this one is a boy, I don't know what I will name him!