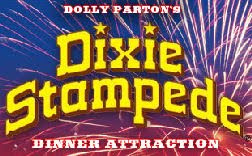 We just recently came back from a trip to Branson, MO. You can read my travel re-cap here. One of the attractions we saw while in Branson was the Dolly Parton's Dixie Stampede Dinner Attraction. I have only been to one dinner attraction and that was when my husband and I went to Vegas 3 years ago for our anniversary which was a lot of fun. I was really excited about seeing the Dixie Stampede because I had heard many great reviews. I was really interested to see how Ethan would do during the show especially after the incident the evening before at the putt-putt course!

About the Dixie Stampede!


Dolly Parton's Dixie Stampede is a unique dinner and show experience set in an 85,000-square-foot arena featuring 32 magnificent horses, a stampede of Longhorn steer, dozens of amazing cast members, beautiful music, and audience participation, all showcased in a friendly rivalry between North and South and complemented by a fabulous four-course feast.

Dixie Stampede began as a dream for Dolly Parton. With 32 horses, dozens of cast members and seating for 1,100 in a giant 35,000-square-foot arena, Dixie Stampede Dinner Attraction is Dolly Parton’s vision. Today it is one of the most spectacular dinner and show attractions in the country, with locations in Pigeon Forge, TN; Myrtle Beach, SC; and Branson, MO.


“I wanted to recreate the family fun of my childhood, when we’d gather for a friendly competition then enjoy a more-than-filling meal,” says Dolly Parton, Dixie Stampede Owner. “With the grand entertainment of our horses and performers, along with a delicious meal, Dixie Stampede is the most fun place to eat anywhere.”

In 1986, Dolly Parton created a spectacular arena show complete with a four-course dinner. Together with top entertainment attraction developers, she combined the glitz and glitter of a stage show with the thrills of performances by live animals.

The show’s newest show feature features the new musical-comedy celebration, “Gold Rush Jubilee”. Enjoy the comedy of Prospector Skeeter as he discovers the “golden nugget”. Then the hootin’ and hollerin’ begins as cowboys enter the arena on horseback as an elaborate dance hall stage descends from the ceiling. Next, a different kind of “gold digger” shows up! Dressed in beautiful costumes, dance hall girls break into a rollicking cancan followed by the arrival of the stagecoach. All the commotion is settled Dixie Stampede style, with a friendly competition and a hearty four-course meal.

The show’s patriotic finale is themed in sparkling red, white and blue. Horses, riders, singers and dancers all pack the arena to create a glittering tribute to life in America. At the spectacular finish of the show, over 30 white doves of peace are released into the air to celebrate our freedom. Dixie Stampede’s immense sets, extraordinary animals and performers bring the crowd to their feet.

And for dinner...
Imagine cooking 1,100 whole rotisserie chickens, 250 pounds of hickory smoked pork loin, creamy vegetable soup, corn on the cob, potatoes, biscuits and crispy apple turnovers and serving it up to 4 times daily. It’s all prepared with skill – and specially designed high-tech equipment to feed thousands of guests at “Branson’s Most Fun Place to Eat”.

Later in the day, fresh cut potatoes are seasoned with special herbs and spices, homemade creamy vegetable soup is prepared to the original secret recipe in large kettles and corn on the cob is boiled in oversized pots. Biscuits are prepared from scratch each morning. Crispy apple turnovers are the last to go in the oven; just before show time so they are served piping hot.

Daily delivery of thousands of fresh chickens makes the dinner attraction one of the largest accounts that Tyson Foods supplies. Soft drinks come from the Pepsi-Cola Company; in fact Dixie Stampede is Pepsi’s largest fountain account in the state.

Dixie Stampede is renowned for serving generous portions of wholesome, mouth-watering food. While the show is in progress dozens of costumed servers dish out each course. 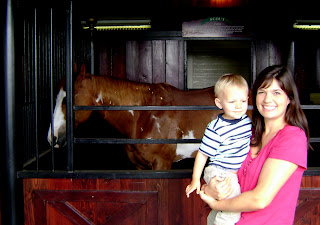 When you arrive at Dixie Stampede you walk past the stables of the horses to get into the entrance. Ethan loved this! Unfortunately (but understandably!) you aren't able to actually pet the horses. We stopped for a photo in front of one of the horses, Scout. I don't think Scout was too interested in having his photo taken though.

We made our way inside the building, gave our tickets and had our photos taken. Then we found seats in the Carriage Room for the pre-show. Before the pre-show started I got a yummy strawberry-lemonade slushy and Andrew got a soft drink to enjoy during the show.  People started to slowly fill in the seats in the Carriage Room. The pre-show was a juggler with a sense of humor that was fun and we had a lot of good laughs from his jokes. He preformed so many different acts and it was very entertaining. My husbands favorite one was with balancing the golf clubs and golf balls. You would just have to see it yourself to believe it. My husband is a golfer and he was really impressed!

After the pre-show we filed into the main show room. Our server was super nice and he didn't waste anytime getting our drinks out to us and letting us know what to expect with the food being served during the show. There really wasn't a long wait at all until the show began. It is great that the Dixie Stampede is a very organized production and makes it very enjoyable for the guests. The food itself was wonderful! I wasn't sure what to expect about the food since several hundred people were being served at once. All of the food was fresh, hot and tasted great. My husband ate most of my chicken as well as his. I don't know where he put it because that was a lot of chicken! Even the dessert, apple turnovers, were piping hot! No one will leave the Dixie Stampede hungry that's for sure. We were probably half way through the show before we could get Ethan to eat a bite of food. He was so fascinated with the show and could not take his eye off of the horses galloping around. Andrew and I couldn't believe he was so into the show, but after the putt putt golf incident the night before we were ecstatic because we knew we were going to be able to stay for the whole show!

The show itself was fast paced so there was never a down moment or where you felt bored or lost. The storyline is about the history of the frontier and it was filled with different scenes and gorgeous costumes. The show involves guest participation which also keeps it fun and interesting (especially for the kids). I greatly appreciated the honor and respect that the Dixie Stampede gives to our American history and to the US itself. At many times I feel that many Americans do not appreciate what a great country we live in and it was refreshing to see a production pay tribute to how blessed we are. I would say that above all that was my favorite part of the whole Dixie Stampede show. The end of the show was filled with fireworks as well which was really exciting for Ethan. The Dixie Stampede far exceeded my expectations. Compared to the dinner show we saw in Vegas a few years ago, it totally blew that one away in every aspect.

Here are our pictures from the show. I love the one of Ethan with the horse! We bought the photo of all of us together for our keepsake for our experience. I'm so glad we did. 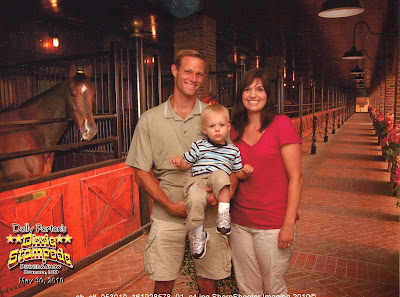 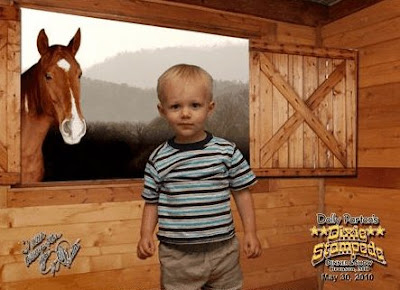 Thank you to Dixie Stampede for such a wonderful memorable evening for our little family. I will be highly recommending this show to all my friends and family who travel to Branson. We are also planning a weekend trip to Branson in September with a group of friends. We were talking about seeing a show while we are there. If we do, my vote will be for the Dixie Stampede again!

I received complimentary tickets to see the Dixie Stampede. I was not obligated to post a positive review. All opinions and experiences are 100% true and mine.
Posted by Chari at 3:02 PM