How long does it take you to get a temperature on your child?

When your child is not feeling good, feels extra warm to the touch, the last thing you want to do is keep them still while you try to get a temp. The Exergen TemporalScanner will give you an accurate temp in 2 seconds! With the swine flu sickness spreading currently and winter coming soon, bringing even more sickness, you want to be prepared!

How the Exergen TemporalScanner works... 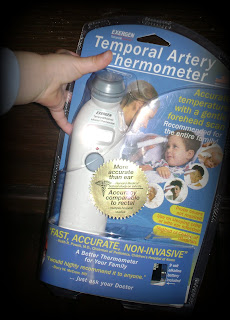 The Exergen TemporalScanner gauges body temperature in two seconds by capturing the naturally emitted heat from the skin over the temporal artery, which runs across the forehead and is directly connected to the heart via the carotid artery.  As you gently stroke the thermometer across the forehead crossing over the temporal artery, the sensor in its probe performs two processes:

First it scans like a video camera, capturing naturally emitted infrared heat from the arterial blood supply at about 1000 “frames” per second, locking in the highest temperature it senses and; 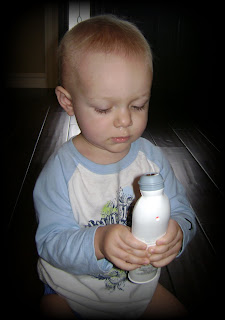 Second, at the same time, a patented system measures the ambient temperature of the site where the temperature is being taken. The patented "arterial heat balance" (AHB) software then synthesizes the two separate readings to accurately determine and display body temperature.

Our Exergen TemporalScanner Experience...
Ethan just recently had an ear infection and now we are fighting some other type of sickness. We have had to take his temperature numerous times during the last few days. The Exergen TemporalScanner has been a life saver! Ethan must think it tickles because he starts laughing and holding his head when I scan it across his forehead.

The Exergen TemporalScanner is very simple to use: 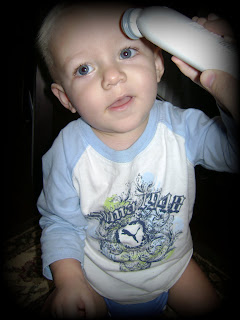 Not only is the easiest thermometer to use, but I also like the fact that testing shows it the most accurate form of taking a temperature.


BUY IT! You can purchase the Exergen TemporalScanner at your local retail store or from a few websites.

WIN IT! Exergen is giving away ONE Exergen TemporalScanner to a Take Time to Smell the Rose reader! Just fill out the entry form below.

This giveaway is open to USA & Canadian residents ONLY . Must be 18 years old or older to win.

Thank you to Exergen for providing me with a TemporalScanner. All opinions are my own and no other compensation was received to conduct this review & giveaway.

I've been hearing about these. I think I'll get one and try it out soon!

I'm going to be a grandma soon so I need to have one of these on hand.

I have this thermometer and I LOVE it!! It is so uninvasive and easy to use. A must for anyone! Great giveaway. :)