Ahh, this is totally the best part...seeing everyone's stash! FUN!!

I have various types and brands of diapers. When I was pregnant I decided for the first stage to do half FuzziBunz and half prefolds with covers to see which type I liked the best before purchasing anymore.

I have 10 small FB, purchased at Fuzzi Bunz Seconds. I got them for $10 each. For inserts I bought microfiber towels from the automotive section and folded them to fit into the FB.

I also purchased 1 dozen newborn (orange) prefolds from Green Mountain Diapers.
I had read great reviews on their prefolds. I went ahead and bought 2 dozen of their small (yellow) prefolds because I thought I would continue to use prefolds/covers and I would save on the shipping by making one purchase. I made 3 diaper covers using the Rita Rump free pattern and purchasing the PUL from Wazoodle.

We didn't start using cloth diapers until baby was about 1 month old. By that time the diaper covers I had made were too small (I later had read reviews of people saying the pattern ran small, yes it did!). Plus I didn't realize I needed a new cover everytime I changed a newborn! The FB fit well, but now I had all these prefolds. Since I didn't want them to waste I purchased 10 of the cheapest diaper covers I could find, Prowraps, direct from the manufacturer. I wasn't too impressed in them, but they worked. 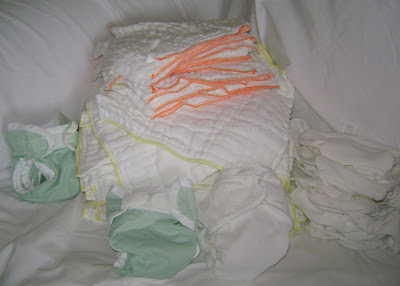 We grew out of the FB around 15 pounds. The prefold system just wasn't for me or my baby. He is the type that screams after one pee in the diaper until he is changed with a dry diaper. The pocket diapers kept him feeling dry and could stay on longer. I decided to try some one size diapers. I was skeptical but heard great reviews from friends. I snatched up 10 Haute Pockets (the periwinkle ones) at Nikki's Diapers for about $10 each. They are really showing their wear because this is all I had and end up using sposies some as well.

A few weeks ago I bought a 3 pack of the smartipants. See my review. They are much smaller than most one sized diapers. I would also add now to that review, that because of the one row of snaps they slip a lot more than the two row snap diapers. They are my least favorite diaper and would not recommend them to anyone for several reasons.

Still lacking more diapers to my stash (you must admit, it's difficult to have a stash of 13 diapers!) I snatched up a super deal on 16 large swaddlebees in their outlet store just a couple of weeks ago. They are the AIO diapers (the lavender and maroon diapers). One again, the sizing runs really small, so these are fitting my tall baby like the highest setting on the smartipants! I decided to keep 8 maroon and 1 lavender (I washed the lavender one first to try out) because even though they are getting too small, they absorb nicely and I still need enough diapers for this "stage" for the next child. If anyone is interested in 7 unwashed lavender AIOs let me know! I'll be putting them on diaper swappers soon.


Just last week I recieved a one size Happy Heiny cow print diaper from a friend for my baby's one year birthday! This is my favorite diaper so far !! It runs much larger than the Hautes so he can actually wear this for a while! 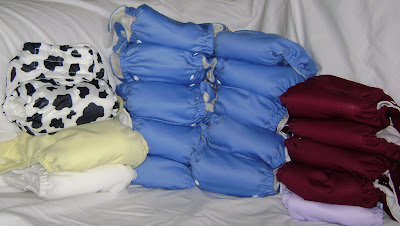 I want to also add I'm still using the same microfiber towels I did in the small FB! I never sewed them together or cut them down to size. It makes the diaper a little more fluffier but much faster to dry.

That's my stash! I'm now on the search for a good deal on the next "size up", thinking about either Happy Heiny's or Fuzzibunz sized diapers. Whatever I can find a good deal on.
Posted by Chari at 2:57 PM

Thanks for joining in Chari. :-) Fun to see your stash! Prefolds also make great dust rags if you ever decide you don't want them. We have a few gerber ones we use for that and I hate dusting without one.

If you want me to blog about the lavender ones for you before you try diaper swappers let me know. You could e-mail me a picture of them and I will include that in the post. Let me know.

I'm a prefold lover here but I'm also very fond of my BG pockets, they are so simple.

Can you share how you made covers from the RRP pattern? My boys are growing out of their covers and I wanted to try to make them to save money.

I love prefolds, but my little guy cries immediately when wet in a prefold too, so if I am going out or don't want to have to change every 20 minutes I like my thicker fitteds or pockets.

I had FuzziBunz stuffed with a microfiber towel too! It sure makes for a trim fit. I sold my FBs after Lizzie grew out of them to fund a gender neutral/boy stash for my little guy :)

I tried Happy Heiny sized diapers when I first started CDing way back in 2007. Their solids worked fine but the prints wicked a lot. I wonder if they have done something to improve them...