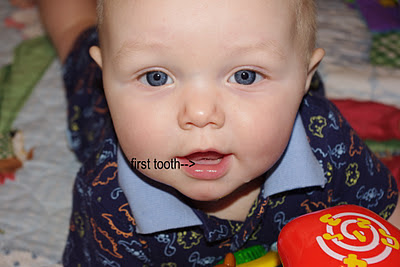 It's here!!! It's the best picture I could get with a mouth full of slobber. Speaking of his mouth, he has a lip tie! I thought he had one, but it wasn't until a couple weeks ago that I finally saw a good article online showing clear pictures of what they look like. To me it looks like he has a severe one, but we will have to see what the specialist thinks. He sees an ENT in November. If it's a simple one it will be clipped in office, if it's not he will be scheduled to go under anesthesia. Hoping it's a simple one!

I don't think it has effected the breastfeeding any ,but wondering now if it was the root cause of him not able to latch deeply enough (causing sore nips) when I was engorged and causing thrush soon after. However, when he does nurse he top lip looks very tight and does not come up and over the nipple like it should. From what I have read having a lip tie can cause a gap between the two front teeth, cause speech problems and even tooth decay. I would rather get it taken care of than wait and see if we have any of these problems down the road.

Has anyone had a child with a lip tie?

Connor didn't have a lip tie, but he had a mild tongue tie. We didn't have to have it clipped, it stretched out over time, but it did cause a shallow latch and sore nipples at first.

Hoping for the quick fix too!!

I have had issues with nursing both of my babies, and a couple months ago, noticed that it looked like my baby girl has a lip tie. When I looked at my 2 year olds mouth, it looked like he has one too... I mentioned it to my dr. but he didn't seem concerned at all. :( I wish I would have caught it sooner, because it may have helped our nursing problems.