Update #1 on Cloth Diapering a Newborn 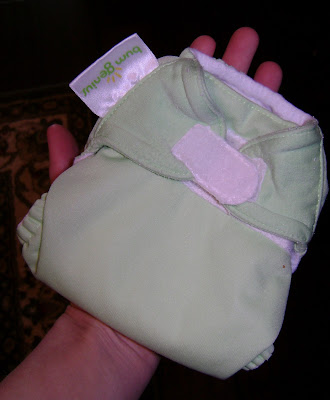 An extra small BG AIO. It's so tiny!

I just wanted to tell everyone a huge 'thank you' for all your suggestions on how to cloth diaper a newborn! I also wanted to give you a little update about what I have been up to since that post and getting suggestions.

It seems as though most everyone would agree that AIOs or prefolds with covers was the best route to go with newborns. AIOs would be the easiest and possibly the best way to efficiently contain those blow outs that happen so often with newborns ;-) Prefolds and covers would be the most economical route to go. Fitteds were suggested as well, but they can be pricey compared to just doing prefolds and covers. Unless you make your own fitteds.

I love using prefolds because Ethan never got a rash when I used them a lot. If he ever did get a rash, it would clear up in one day by using prefolds. However, I didn't start using prefolds and covers until he was about 4 or 6 weeks old. The newborn prefolds were getting small by then, but they did get a little use. The couple of covers I made were too small and I didn't get to use them. I ended up buying several cheap prowraps which I hated. No matter which way I tried to fold and snappi the prefold I always had blow outs through the legs. The covers always seemed to get dirty and I would have to put it in the dirty pail after one use. Husband did not like using prefolds and covers and never got the hang of it. I had a few small fuzzibunz and those were the diapers he would reach for when he changed him.

So I decided to do a little of everything to figure out what I do like using for a newborn. I found a few extra small BG AIO on Diaper Swappers that I found for a good deal. I also have my dozen newborn prefolds that I have from Ethan. After doing some searching I decided to convert the prefolds into pre-fitteds to make them more user friendly AND contain blow outs better. I have been working on them the last few days. One prefold is trashed! I'm still coming up with the easiest way to convert and not use a serger. I don't have a serger and I know many women do not. There are a handful of tutorials out there, but it's still not what I'm looking for. I will be posting my tutorial when I am finished. I'm determined to make this the best way to convert a prefold to a pre-fitted!

If you read my last Wordless Wednesday post you know that I bought a yard of PUL at Joanns. I plan on make my covers with this. I had to order my FOE (fold over elastic) online and it just came in yesterday. Yesterday I spent the day trying to use FOE on my prefold convert and discovered it does NOT work. I tried several ways and a prefold is just too thick to use FOE. (That was my trashed prefold!)

I also have my eye on some really cheap smaller sized pocket diapers that I may finish up my stash with. I aim to have 2 dozen newborn diapers. I'm really watching some much I'm spending on creating/building my stash and doing it as cheaply as possible.

Give me a week or two and I should have everything completed and I will be posting about it and including my tutorial(s) as well. I hope that my experience will be helpful to others in creating a good newborn stash that functions well and is pocket book friendly.

I can't wait to read more! I've been debating which route to go with our baby due in February, so this is perfect timing. I'm looking forward to your tutorials!

I'd be interested in that tutorial too. Not that I have time for yet another sewing project right now, but I'd like to see how easy it is.

I don't know if either of these tutorials would be helpful or not: http://www.fernandfaerie.com/sewing_fitteds.html

I have used a modified version of the first one to make my own contours. The second looks pretty detailed, but has instructions without using a serger. It still uses snappi closure, but at least they have leg elastic. Let me know how it works for you! I may be interested in trying, but I'm running short on time and my project list is already sooo long! :o) Good luck!!

Just came across your blog and loved all the family pictures I saw...I'm a freelance clothing designer/stay-at-home mommy of three, so I know how HARD those family poses can be! =)
Kristina J.