Show Us Your Life- How I met my husband 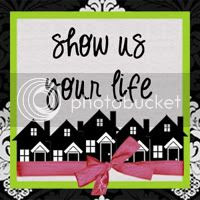 Today at Kelly's Korner the Show Us Your Life topic is "How I met my husband." I think our story is a little interesting so I'll share mine :-)

My grandad sells insurance and my younger sister at the time worked at his office. In October of 2003 a couple of weeks before I met Andrew, my sister was telling me all about this cute guy that gets his insurance there and how she was going to set me up with him. Of course, she knows where he lives, what kind of car he drives and all about his family because all of his family gets their insurance there as well. My mom and sister even made me drive by his house (which was 3 blocks away from my parents house!) which he just built (he's a home builder). So I was stalking this guy LOL

I worked at a MRI facility and a couple of weeks later (Oct 30) I get a phone call from one of the doctors 2 blocks down the street from us who refers a lot of patients to us. As I was taking down all the information I was stunned when the girl told me Andrew's name as the patient. Automatically I started shaking~never before have I ever done that and never again either! Then as I got his address it confirmed to me it was him!! It so happened we had an appointment opening at that moment and I asked if they would like to come right over for the MRI. Of course they(his mom was with him, she is a doctor) did! I was shaking and couldn't believe I was getting ready to meet this guy. I called my mom and asked her what I should do. I concluded that I should act like I didn't know anything about him and casually ask , "Oh, you live in ___? My parents and grandparents live there." And of course they ask, "Well who is it?" Then when I told them who my grandparents were and they said how they knew them everything started from there!

My co-workers were laughing at me because I spent the whole time in the waiting room talking to Andrew before he went in for his scan. Later we laugh because Andrew says his mom was "grilling me" with questions about myself. I knew that is what she was doing, but I totally didn't mind she was very nice. By the time he went in for his scan he had asked me out. He had a brain scan so we now joke that I had proof he had a brain before I even went out with him.

Our first date was 2 days later (Nov 1st) and by the end of the date I knew he was definitely the guy I wanted to marry! We were engaged 4 weeks after our first date and married exactly 7 months after the day we met (May 30, 2004).  You can see pictures of my wedding by visiting the "My Wedding" category in the archives.

Next month we will celebrate our 6th wedding anniversary. I can't believe it's been that long!

Labels: Show Us Your Life

Congrats on 6 years! Our 8th anniversary is May 4th, but our story is near as cute as yours. :o)

That is a great story! I may have to check out Kelly's Korner and do a post on this too! :)

what a cute idea! great story!

What a great story! Congrats on 6 years.