Ok, so last Wordless Wednesday I gave a little hint what I was up to. I've been craving apple butter and it so happened the grocery store had gala apples on sale for 90 cents a pound last week. I picked up 5 lbs and gathered up my mom's canning supplies and attempted my first ever canning experience!

I wanted to make a small batch and I also wanted the apple butter to be a healthy version sweetened with honey. I came across the Pick Your Own website last year when looking for nearby organic orchards (umm, there isn't any around here!). When I was searching for an apple butter recipe I came across the site again. I believe this is the best site out there that outlines how to make/preserve different kinds of fruits, etc. Great info! Definitely bookmark it for future use. They also have lists for pumpkin patches and Christmas tree farms so this is a great resource for all families.

First you have to make apple sauce before you can make apple butter! I washed, peeled and chopped 5 lbs of gala apples. IF you are using organic apples it would be a great idea to leave the peels on that way there is more fiber and it will make more apple sauce/butter. But since mine weren't organic I peeled mine. 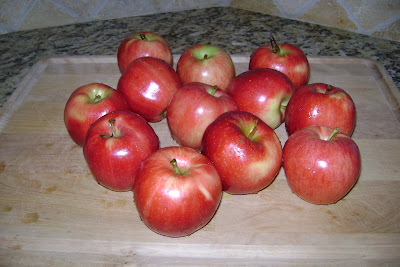 Add to a large pot with some water to cover the bottom. 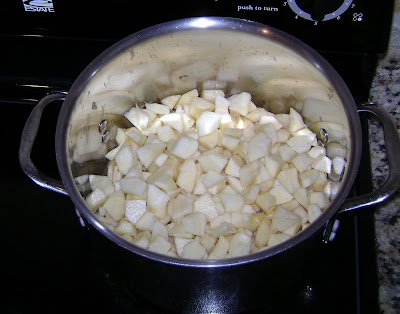 Cover with lid and cook on low to medium heat until tender. Approximately 25-30 mintues. 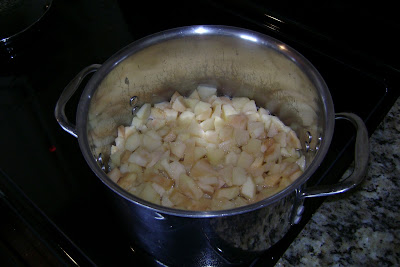 Next you need to puree the apples. You can do this several different ways: blender, food processor, ricer, or hand smoothie blender. I picked up this little hand ricer on clearance so I used it. I think it works great for making apple butter. When you make apple butter you are cooking down the apple sauce to make the butter, or essentially getting rid of the extra liquid. I would take spoon fulls of the apples and the first little squeeze with the ricer would push out more liquid so I would hold it over my pot. Then as the apples begin to push through the ricer I would hold it over my crockpot. 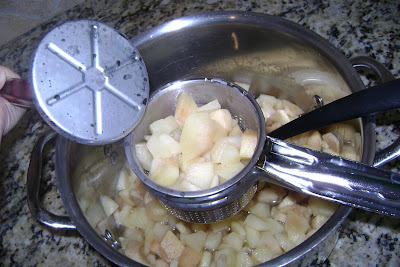 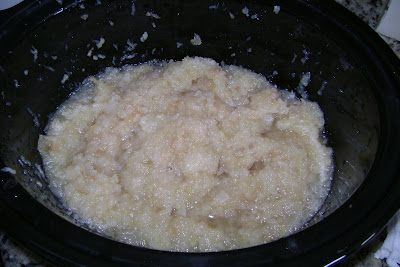 Then add the sweetener. I added 1/2 cup of honey and it was plenty! That is the great thing about using galas is because they are naturally pretty sweet. 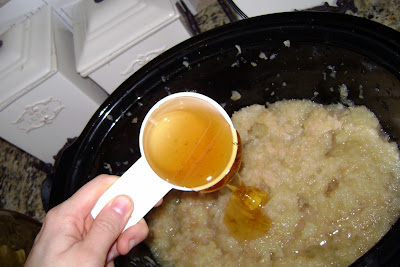 Add 1 teaspoon cinnamon and 1/2 teaspoon allspice. I don't like my apple butter very spicy. The recipe on PickYourOwn also calls for cloves, but I decided not to add that. At the end I decided on one more sprinkle of each and it was just right for me. 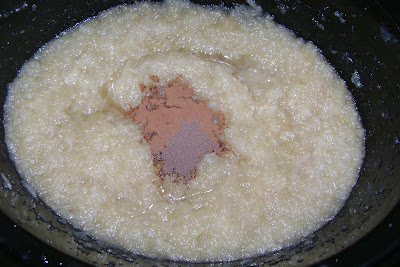 I took the tip off the PickYourOwn to lay 2 knives over the ledge before placing the lid on top so it lets all the condensation out. Worked great! 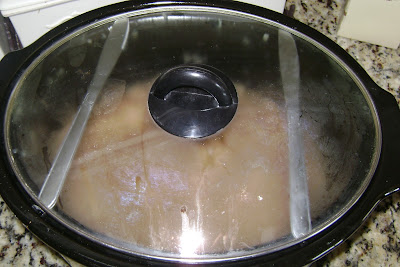 I cooked it for about 4 hours. Again, read the tips off of PickYourOwn on how to tell when it's done. 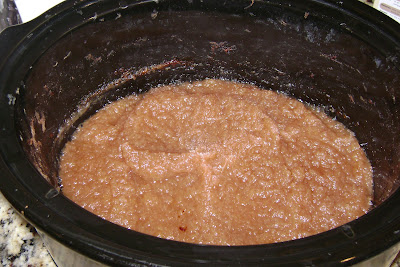 I then canned the apple butter using a water bath method. I didn't take pictures because I was doing this by myself and needed both hands for everything. I ended up with 3 half pints! Each half pint is 8 oz.Wow, a lot of work for so little! Even with the apples at 90 cents a pound this still ended up being kind of an expensive project. So after doing some reading online a lot of people actually buy jarred apple sauce at the store and make apple butter from that. They claim it tastes the same. Unless you are getting your apples free, I would recommend doing this method as well. Not only for money, but time as well. Don't let this scare you into not canning, because really there are other easier ways to can AND it can also save you lots of money. I plan on having my own garden next year and the main purpose is to grow lots of tomatoes so I can make my own sauce. We eat a lot of tomato sauce and this would be a huge money saver for us. 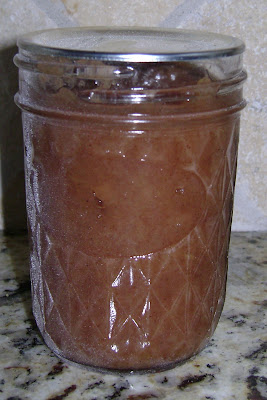 I ended up making grape jelly the next day! Yes, I was on a roll. I will post soon about this and some basic canning tips as well that will help some of you who are interested in canning, but have no experience.

How fun! I made Apple Butter a couple years ago and it turned out so good. Have you thought of maybe contacted local farms to see what they charge for seconds? They may not be certified organic, but you may be able to find some that are not sprayed as much.