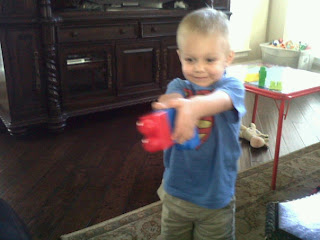 The other night I was watching part of a movie and it had a little boy in it with a play gun. At the time Ethan was playing with his mega blocks, but a few minutes later I saw him holding up something and making a gun like noise. He had made his own gun out of mega blocks and was acting like it was a gun! It kept falling apart and he would just put it back together and start "shooting" with it again. I tried getting a decent picture of this with my blackberry. I could not believe it! He will be 2 years old on the 16th and it blows me away that they absorb so much!

Great imagination! Seriously, they pick up so much!!
My brother was reading our niece a book and the Count from Sesame Street was counting sneezes. Tate, who didn't appear to be paying attention, bent over and made sneezing noises; then stood up and said, "ah, ah, ah!" (his Count laugh). I should mention that lately when I sneeze, I bend over. :o)

I am soooo glad to know I am not the only parent out there allowing their young child to play with imagination made "guns"! I think to many parents today get all up tight over little kids doing this. I personally think it is just part of being a boy and with some explanation, your child does understand that the fake imaginary "gun" is okay to play with but real guns can hurt someone.

Yay! Thanks for making me feel like I am not a mom all alone!

My little nephew when he was 2-4 years old he would use sticks as guns....eventually his woodworking father would craft him a beautiful wood rifle but you know what? He still used the sticks LOL