Saturday I hosted a Lingerie Shower for a friend. It was my first time to host a shower all by myself & my first Lingerie Shower to plan as well. I came to the conclusion today that I LOVE hosting parties, but especially showers. Showers are for those exciting moments in someone's life and it is fun to make it a memorable day for them.

When throwing a shower it is so important to consider the recipients personal likes. I have been to so many showers that just seem "generic". It is so easy to buy a "party in a box", but to me that just says "I put no thought or origination in your shower." I actually become pretty obsessive about every detail and want everything to flow together.

I searched for many hours for photos and examples of lingerie showers done and there were not really many....at all. First, I had to figure out my friends favorite color- royal blue. Ok, so royal blue alone isn't very romantic so I needed to add black as well. Let me tell you, finding anything in royal blue was almost next to impossible unless it also included red & white (for the 4th) or graduation. So I did a ton of shopping, looking online and lots of thinking to get the right look for a lingerie shower.

First off the cake! The best part right?? I asked the help of a friend who has made a few fondant cakes. I attempted to make a layered fondant cake last year and wasn't impressed. After watching her decorate it, I'm confident I can do it. The next birthday will be Ethan's in August so I need to start practicing now ;-) She did a great job. Here's a couple of pictures. The special edited ones where done with my new Digital Scrapbook Artist2 program (I'm doing a giveaway of the program too, go here to enter!!). 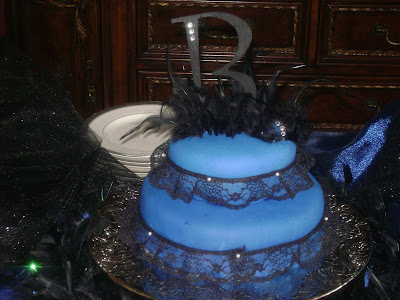 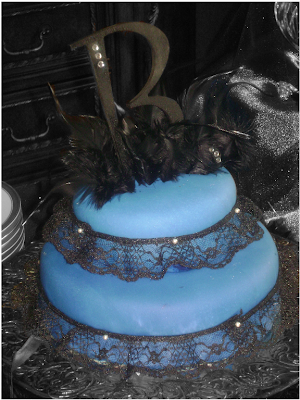 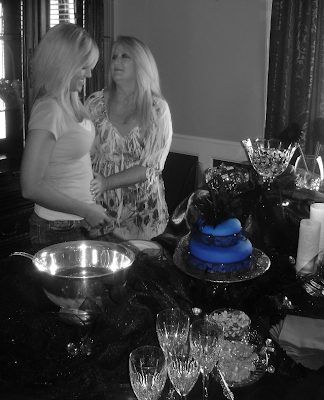 I placed the silver punch bowl on a sturdy cardboard box then covered black satin around it. On top of that I poofed black tulle around it and draped shiny black tulle on top. 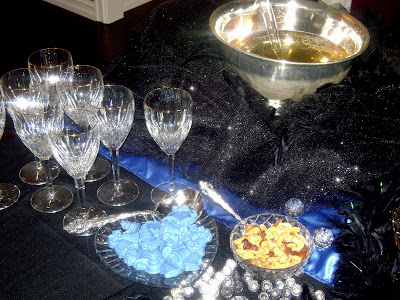 On the other end of the table I used a taller cardboard box and wrapped another black tablecloth I had around it. I poofed the royal blue chiffon fabric around it and draped the shiny black tulle on top. I found a pretty glass vase with the initial "R" on it and filled it with some of the glass marbles in the bottom. I looked at several places for royal blue and black artificial flowers. I finally found these black ones at Michaels on sale for $1 each. I think it made a nice touch. 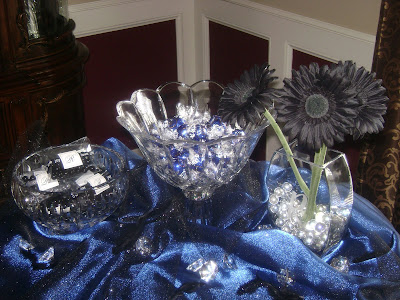 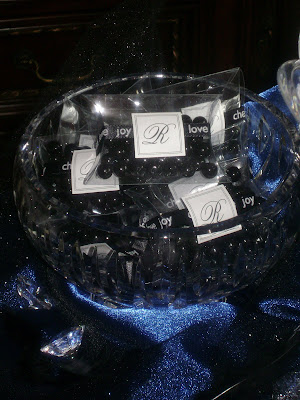 Of course I had to make some chocolate covered strawberries! Real chocolate, don't skimp with almond bark, ick! I made some regular ones and also some dipped in coconut, pecans and chocolate sprinkles. 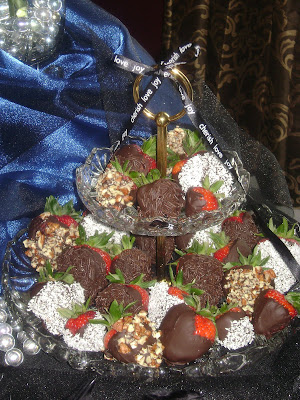 Here is a photo of all of us with the whole table. 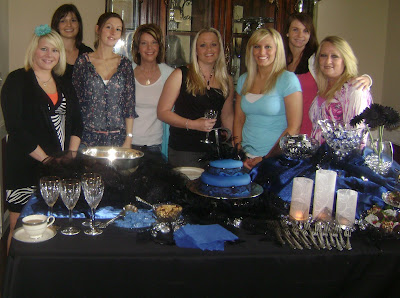 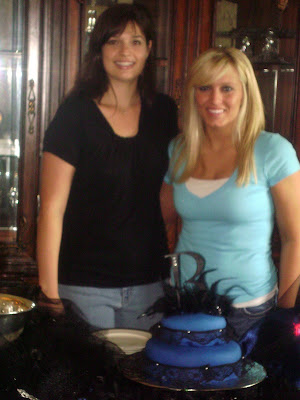 I decorated the mantel in the living room with candles. Then I made a "clothes line" from extra black ribbon I had. I tied various black and blue underwear to it. Instead of a guest book I bought blue cardstock and cut out cards with decorated scissors. Then I glued white cardstock on top of the blue to make it easier to write on. Each guest made a special note to the bride on the cards. I left a crystal bowl for them to drop the completed cards into.  I am going to put the cards and photos into an album for her keepsake gift from the shower. 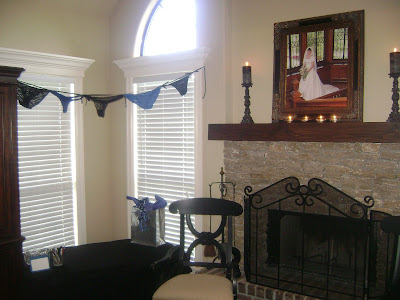 I am not going to share any details about the games or show photos of the gifts ;-) The games were a little wild, but not too wild. Everyone was a good sport playing them. If you are planning a lingerie shower and would like the details of the games drop me an email and I'll share.

The party table looks very elegant! The cake is beautiful. Looks like you went to a lot of work to coordinate the theme and colors. I'm sure your friend was impressed with the personalization.