Show Us Your Pets: Our Malamutes

Today at Kelly's Korner we are showing our pets! Not only am I excited to share pictures of our beloved dogs, but I also want to educate you on what a Malamute is! It's a pet peeve of mine no one really knows what they are and mix them up with Huskies all the time ;-)

My husband bought his Malamutes before we even met. I had heard of Malamutes before and knew they were large dogs, but that was about it. We live in Oklahoma and they are not popular around here for obvious reasons.

Curling up sleeping in the cold. 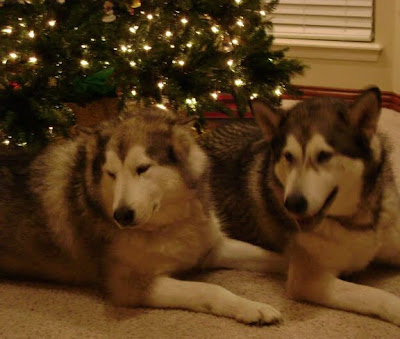 In their air conditioned dog house. 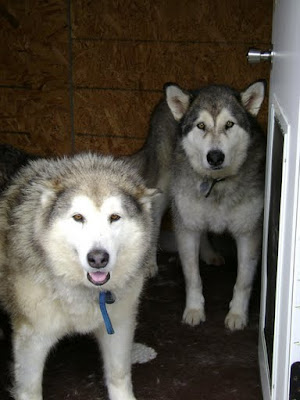 The female is an Alaskan Malamute. Her name is Chimara and she is the shortest and oldest one. Gryphon is a Canadian Malmute and the youngest one.

Malamutes are very sweet dogs and are great with kids. Ethan loves playing with them and also likes standing by the window watching them outside. When I first met Andrew, the house he lived in had a doggie door through the back door that went to the utility room. The dogs were free to come in and out as they wished. Since their fur is so thick they would not be able to survive the humidity and heat of our Oklahoma summers. I didn't really like this because their fur still floated from underneath the door through the house. Yuck! Sorry, but I'm not too fond of any animals in the house!

The first house we built, Andrew built a large doghouse in the backyard and added a air conditioned window unit. This kept the dogs outside completely and were still able to keep cool in the summer. The next 2 houses we built (my husband is a home builder, this is why we are always building and moving lol) we sectioned out a nice room inside the house for their doghouse. Their doghouse is completely closed off to the rest of the house and you have to go outside to access it. We have a drain in the floor and cover the concrete with covering to keep their elbows from rubbing raw. We added a air conditioned window unit here as well so they aren't on the main heat and air of the house. Yes, they are pampered paws ;-) Even with the air conditioning you'll find them outside in the middle of the summer laying out in the sun. Chimara does it all the time, Gryphon not so much. He is the smarter one!

So, people mistaken these dogs all the time for Huskies and every once in a while you'll hear someone call them a wolf. They are actually the closet breed to a wolf. Did you know that Malamutes don't bark? Naturally they don't. Now Gryphon does sometimes, but it's not your typical bark. They do more of a howl, but it's not a creepy howl.

How do you distinguish a Malamute from a Huskey? Malamutes are MUCH LARGER. Huskies are more of a medium sized dog. Put a Huskey next to a Malamute and they are about half their size. Also Malamutes faces look different. Their heads are much larger and Huskey's faces are much pointier. When we are talking to some people they will say "yeah, I had a Malamute growing up", then as they go on to describe the dog we just know it was not a Malamute, but a Huskey.

Most movies have Huskies in them. Have you see the movie Eight Below? Most of the dogs on the sled team were Huskies, except for the main dog (I don't remember her name because my husband refuses to watch it again lol) was actually a Malamute.

I hope you feel a little more educated on Malamutes now ;-)