Guest Post: Fluoride in Our Water….. Should We or Shouldn’t We?

So there I was at the dentist for my bi-annual cleaning, and the hygienist asks me if I want the fluoride foam treatment this time. What? I had never heard of this before. So she explained to me that doing this foam-like treatment for a minute or however long it was helps strengthen the enamel in my teeth. Hmm. Well isn’t that what the fluoride added to our water is supposed to do? But wait, isn’t fluoride poisonous? Like, be sure not to let your children eat any toothpaste because it’s harmful and dangerous?? 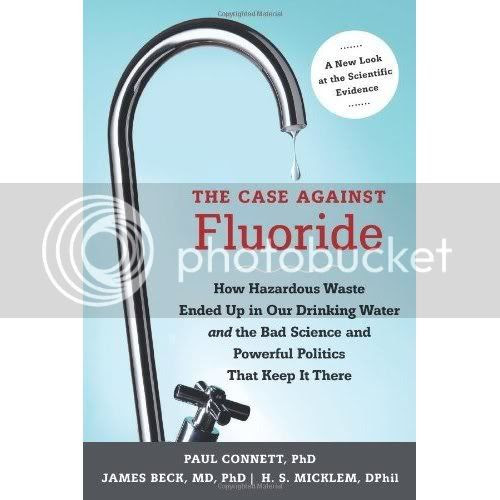 Well that got me to wondering about this whole issue, and as luck would have it, the next day I was at the library and saw a brand new book, “The Case Against Flouride”, on the shelf. I’m not through with the 355 pages yet, but I am over halfway done, and I will say I have since bought a Berkey travel lite reverse osmosis filter with the extra arsenic and fluoride cartridges . Let me share what I have learned, and of course, the final choice is up to you. I just feel strongly about this issue and feel that parents ought to at least be aware of what is going on so they can make their own decisions about their and their children’s health.

First off, my background is in medicine. This book is pretty heavy on the biochemistry and physiology of fluoride, but I think it is presented in a pretty reasonable fashion for non-medical folks to get a grasp of what’s happening. I guess this post is somewhat of a book review, the Reader’s Digest or Cliff Notes version.

So here’s what I have learned and believe to be true thus far.

1. The fluoride added to public water treatment systems is toxic waste, a by-product of the fertilizer-production industry. The book calls this toxic waste for a good reason – in Florida the phosphate rock also has radioactive uranium that is mined from it at the same time. There are no tests performed to see how much of the radioactive uranium ends up in the fluoride “recovered” from the production process. Even more concerning to me, the “scrubbing” liquid that removes the excess fluoride contains both arsenic and lead, which are not removed or tested for before being sold to water treatment plants. There is a lot more to this process and what comes out of it, but that’s the bare bones of it. An excerpt from the book and the link that you can go to and read the entire article, published on the University of Southern Florida’s own Phosphate Research site.

Fluorine from the phosphate industry is one example. In the late 1960s the state of Florida passed laws restricting air emissions in part because fluorine from the phosphate industry had begun to harm citrus trees and there were cases of fluorosis in cattle. Since that time phosphate companies have improved the techniques they use to remove contaminants before they are released into the air - such as scrubbing the stacks that processing plants use to release steam. Fluoride is scrubbed from the stack and is either recovered to make fluosilicic acid, which can be sold for uses such as water fluoridation, or is sent to the cooling pond where losses to the air are within regulatory limits. (http://www.fipr.state.fl.us/research-area-public-health.htm)
And if that isn’t blatant enough to give you pause, here is an excerpt from a journal in 1924, that details how insect poison uses sodium FLUOCOSILICATE (powder form of fluocosilic acid listed above) to kill cockroaches.

S. Marcovitch gives some details as to how those fluoride insecticides work (Ind. Eng. Chem. 16 (1924) 1249):
"The value of sodium fluosilicate as an insecticide is due to the fact that it is both a contact and stomach poison. Shafer has determined that when a roach walks over powdered sodium fluoride a little of the powder adheres to the lower part of the body, antennae and tarsi of the feet, and dissolves in the exudations of the integument. This seems to cause some irritation and uneasiness; the insect soon begins to clean the moistened powder from the body by licking it. In doing this enough of the poison may be brought into the mouth and swallowed, to kill after a period varying in from five to ten days. Other insects, such as Mexican bean beetles, also have the habit of cleaning themselves and by putting their feet in their mouths become very easy to kill. For this reason the sodium fluosilicate is more effective against the adult beetles than the larvae, which do not have these habits."


2. Ingesting fluoride for whatever reason is truly potentially harmful, even at low doses. Even our own EPA controls for the amount of fluoride in the water due to it’s well-known and established effects on humans at higher levels, causing osteoporosis and hip fractures, thyroid damage, skeletal flurosis (gradual stiffening and arthritis-like joint changes), and kidney damage. These “higher levels” are 4ppm and above, which is 4mg of fluoride per liter of water. Here is where I think the most dangerous part for children (and also pets) comes in. How much fluoride a person ingests directly relates to how much water they are drinking. Drinking 1 liter of water at 4ppm is a dose of 4mg of fluoride, and 1 liter of water at 1 ppm is 1mg dose of fluoride. Our current water “safety” allowance is up to 1.2ppm of fluoride. So if a bottle-fed baby in a lower income family is using tap water for formula, then that baby is getting a very high dose of fluoride relative to its’ size, simply because tap water plus formula is ALL THAT BABY EATS ALL DAY!! Human breast milk has virtually NO FLUORIDE to speak of. Concentrations range from .004mg/L to .04mg/L, no matter how much fluoride the mother has ingested. Fluoride is not an essential nutrient nor is it necessary for the human body to function. Now, a liter of water is a lot of volume for an infant or toddler, but a little poison over a long time is harmful too. There are a multitude of animal and human studies referenced in the book that demonstrate clearly that even lower doses of fluoride over a long time period (ie a year) results in the damage to structures noted above. Here is a link to YouTube where some folks in Colorado document what taking in a lot of fluoride via the drinking water did to their horses. Horses drink up to 12 gallons(nearly 45 L) of water per day, at just a 1ppm concentration(as per EPA allowances), that’s 45 mg of fluoride per day! Well-documented in all studies to be harmful and potentially lethal. This was just posted in Octover, 2010, and has quite a few links to more sites to get more information. If it won’t come up, just do a search for “Poisoned Horses” – the clip is 8 min long.


3. Some people are actually very sensitive to fluoride, and can actually show REVERSIBLE symptoms in the early stages of exposure. Gastrointestinal symptoms, heartburn, dizziness, skin rashes, chronic fatigue, headaches, urinary problems, and bone and joint pain. The studies performed on this reaction in certain people were very well done and referenced in the book. This one is easy to test – simply drink water with NO fluoride for at least a week, stop using fluoride toothpaste and mouthwashes, and see if your symptoms go away. (One thing to note, refrigerator filters do NOT filter fluoride- it states so in large letters on the side of the box, we just replaced ours last month and imagine my surprise to see it written all along an entire side of my Whirlpool filter box.) I myself am going to stop using fluoride toothpaste, I have begun using Toothpowder which is completely non-toxic and safe, utilizing baking soda and peppermint oil. Have you noticed that your regular toothpaste has Sodium Lauryl Sulfate in it??? Really? Soap sudsy stuff that we won’t put on our bodies or hair any more?? But we put it in our mouth several times a day and don’t even realize it. I was shocked. I also have long ago switched to Xylitol mouthwash – it’s a natural sweet-tasting substance, kind of like stevia, which prevents bacteria from adhering to surfaces. You will have to get both of these items at a natural foods store if you want to try them.

So there it is, one of my many soap boxes! I urge you to take some time, research for yourself to make your own decision. Water is something we take for granted, it’s our most precious resource, our bodies depend on it for life and health. If you do start researching, it will be more challenging to understand if you don’t have a strong science background, since an awful lot of the information is based on chemistry (yuck! I hated chemistry). I took years and years of it and still get boggled reading it. I wouldn’t say I’m a conspiracy theorist, but as one gets older you realize so many things that happen each day are about money and profit for someone, usually not the end user. I will leave you all with a nice link that summarizes the book as well, with some other posts but a really nice synopsis if you want to check that out also. http://wholefoodusa.wordpress.com/2010/11/04/detoxifying-health-propaganda-on-water-fluoridation-the-case-against-fluoride/

Check out this link to the CDC website to find out if fluoride is in your water.

Thanks for taking the time to read and good health to everyone!

I just wrote a post about this last week. Very interesting book and I'm so glad more people are becoming aware of problems with fluoride.

Yes, it sure was, wasn't it?? It's so amazing to me that this practice continues despite the very obvious facts that it may be harmful, and as the book states, just the possiblity of harm outweighs its' purported benefits. Anyone with half a moment can just check the MSDS for Fluorosilicic Acid and it's clear this is not something anyone should be drinking. Let's keep spreading the word! And so much thanks to Chari for being brave enough to let me put this on her blog- :)